Dr Stefan Fabiansson is a recently retired food safety scientist. He has a past as Professor in Food Safety at the Swedish University of Agricultural Sciences, Chief Scientist at the NSW Food Authority and most recently Head of the Unit for Dietary and Chemical Monitoring at the European Food Safety Authority.
Posted on February 10, 2014February 11, 2014 Spurious health claims 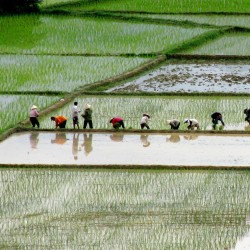 Rice is the most important grain crop in the world (Photo: Claudia Gold)

White or so called polished rice is the most commonly consumed in Asian countries. It is rice which had its hull, bran and germ removed. Since the bran contains a small amount of oil that can turn rancid, rice is polished to prolong its shelf-life but this process also removes some essential nutrients. Brown rice has a higher nutritive value by retaining the bran and germ. It was long a popular choice in Japan, but the trend has been changing with white rice more in favour lately. This is seen as being influenced by a Westernised diet.

It is a peculiar anomaly then that the trend is the opposite in Western countries. Brown rice has been gaining market share in the USA where sales doubled over a five-year period. A similar trend has been observed in parts of Europe because it is seen as a healthier choice over ordinary white rice. In 2008, the U.S. Food and Drug Administration extended the whole grain health claim to brown rice, stating that diets rich in plant foods and whole grains like brown rice, and low in total fat, saturated fat and cholesterol, may help reduce the risk of heart disease and certain types of cancer.

Now a plausible explanation has been found for the added benefits of brown rice. First it is important to know that when brown rice is polished to make white rice, what is called the subaleurone layer located between the white center of the grain and the brown fibrous outer layer is stripped away. In a collaborative effort, researchers at Temple University School of Medicine in Philadelphia and the Nagaoka National College of Technology in Japan were able to show that components in the subaleurone layer inhibited angiotensin II activity. Angiotensin II is a peptide hormone and a known culprit in the development of high blood pressure and atherosclerosis. So far so good.

To add further benefits to brown rice, researchers at the Jiangnan University in China found that germination of the rice can be used to improve its taste and further enhance its nutritional value and health functions. Germinated brown rice is richer in vitamins, minerals, dietary fibers, and essential amino acids, and contains more bioactive components, such as ferulic acid, γ-oryzanol, and gamma aminobutyric acid. Germinated brown rice has been reported to exhibit physiological effects associated with reductions in the risk of some chronic diseases.

But it doesn’t stop there. There is a bewildering choice of unpolished rice varieties classified according to their colour. “Brown” is actually a collective description of unpolished rice that can have many colours so don’t be confused. Brown rice, that actually is brown in colour, contains almost five times the fibre and twice the iron of white rice. Then we have red rice that contains a similar amount of fibre to brown rice but twice the amount of iron and six times the amount of zinc. A variety of anthocyanins give its bran a red/maroon colour. Black rice contains about three times the amount of fibre compared to brown rice. It has a different combination of anthocyanins colouring the bran layer black and turning deep purple when cooked. Purple rice is a short grain variant of black rice known as “Forbidden Rice,” since in ancient China it was reserved for the emperor and nobles, and commoners were prohibited from eating it. It is purple in its uncooked state and deep purple when cooked. It contains similar amount of fibre but almost twice the iron and four times the zinc content of brown rice.

Fibre is beneficial to health as we all know and iron and zinc are necessary trace elements. But what about anthocyanins? Anthocyanins are responsible for the red, purple, and blue colors of many fruits, vegetables, cereal grains, and flowers. They belong to a class of molecules called flavonoids with powerful antioxidant properties in the test tube. According to research from the Department of Food Science at Louisiana State University, a spoonful of black rice bran contains more anthocyanin antioxidants than a spoonful of blueberries, but with less sugar and more fibre and vitamin E antioxidants. So life should be good.

The impact of anthocyanins?

But here is the spoiler. Although a powerful antioxidant with an ability to scavenge free radicals three to five times better than vitamins C or E in the test tube, anthocyanins have little or no value in that role in the human body. How is that? Well, usually less than five per cent of the anthocyanins are absorbed by the body, and most of what does get absorbed into the blood stream is rapidly metabolised and excreted. By contrast, vitamin C is absorbed 100 per cent by the body and accumulates in cells where it is 1,000 to 3,000 times more active as an antioxidant than anthocyanins.

However, don’t despair, clever scientists have found another mechanism with which anthocyanins benefit health. They appear to strongly influence cell signaling pathways and gene expression important in preventing cancer. They also increase the activation of existing nitric oxide synthase, which has the effect of keeping blood vessels healthy and relaxed, preventing inflammation, and lowering blood pressure – all key goals in prevention of heart disease. Both effects could be long-lasting compared to antioxidants, which require constant replenishment through diet. A healthy diet with five servings of fruit, vegetables and why not some black rice would provide a sufficient amount of anthocyanins to trigger the beneficial effects. Large doses taken via dietary supplements might do no additional good or even cause harm. 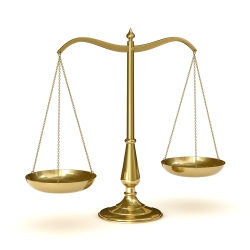 The balance of good and bad (Photo: The op life)

There is one remaining caution necessary and that is the higher concentrations of heavy metals found in unpolished rice. Arsenic can be a concern. Scientists from the US Food and Drug Administration have been locking at inorganic arsenic levels in rice. Although they concluded that levels of the chemical were low and didn’t pose short-term health risks, they found higher levels in less processed rice like brown rice.

Australian scientist have just published results from an investigation of concentrations of a range of heavy metals in Australian grown and imported rice. The concentrations varied extensively depending on their country of origin and variety. Unfortunately, brown rice contained the highest heavy metal concentrations pointing to rice bran as a significant source of the total heavy metal burden in rice grain.

As usual there is a critical balance between good and evil (or as the current Prime Minister of Australia would say: goodies and baddies). In this case I believe that a black rice meal now and then will do mainly good.

3 thoughts on “You should try black rice”