Dr Stefan Fabiansson is a recently retired food safety scientist. He has a past as Professor in Food Safety at the Swedish University of Agricultural Sciences, Chief Scientist at the NSW Food Authority and most recently Head of the Unit for Dietary and Chemical Monitoring at the European Food Safety Authority.
Posted on November 12, 2016 Bad bugs

There are a number of known knowns say food safety types and they insist that we follow their sometimes impracticable or impossible advice. But is scientific opinion always right?

They want us to wash our hands for an impossible 20 seconds. It doesn’t sound much but you stand there with cold hands since it might take more than 20 seconds for the warm water to flow through the long pipe.

Well, Health Canada is a little more sensible reducing the washing time to 15 seconds but insisting it should be warm water. However, contrary to popular belief scientific studies have shown that using warm instead of cold water has no effect on reducing the microbial load on hands. Scientific results also show that soap is more effective than water only and drying with a paper towel is preferable to using hand driers for removing the bugs on your hands.

So the practical recommendation? Above all wash your hands before preparing food with a method you feel comfortable with.

However, to be fair a meta study showed that a diet with more than five servings of fruit and vegetables reduces a person’s risk of developing conditions such as heart disease and diabetes. But according to the Australian Bureau of Statistics, in 2014-15, while half of Australians aged 18 years and over met the guidelines for recommended daily serves of fruit (2 or more serves), only 7% met the guidelines for serves of vegetables (5-6 or more serves). A paltry one in twenty adults met both guidelines.

See what I am saying? And the situation is similar in many other countries. So the practical recommendation? Sure, try to increase your consumption of fruit and vegetables. An extra leaf of lettuce and a tomato on your lunch sandwich might help.

A dropped slice of chocolate cake might be rescued.

And now we cannot follow the 5-second rule any longer, that is if you drop a piece of food on the floor but pick it up within 5 seconds you are safe to still eat it. What a waste of food. Just imagine you drop a nice slice of chocolate cake on the floor but pick it up immediately before the dog can take it and you still have to throw it away. No way I would say and by the way chocolate is dangerous for dogs so you have to be quick anyway.

Though scientists have backed up the new advice. They experimented with different food and contact surface types and concluded that the 5-second rule is a significant oversimplification of what actually happens when bacteria transfer from a surface to food. Bacteria can actually contaminate the food instantaneously. The scientists demonstrated that the 5-second rule was relevant in the sense that longer contact time resulted in more bacterial transfer, but factors like the nature of the food and the surface it falls on are of equal or greater importance.

And the practical recommendation? Obviously it doesn’t help to be quick, the bugs will still beat you. But you might wash off a hard surface and scrape off a little bit of the chocolate cake before eating the rest. If the food is still to be heated there is no problem. But a buttered sandwich surface down might be best to put in the garbage bin.

They also say that when you prepare your hamburgers you cannot rely on your visual senses anymore. That is colour, firmness and smell are not considered sufficient. You have to use a digital thermometer and make sure that the centre of the hamburger reaches 71ºC. You have to fiddle with the thermometer tip sticking it into the side of the burger to reach all the way to the middle while at the same time avoiding getting your fingers burnt. And you have to do it for each burger separately.

Scientists explain that heat-induced denaturation of myoglobin, responsible for the characteristic dull-brown colour of cooked meats, is influenced by a multitude of factors. The interactions between these factors critically influence the internal cooked colour and can confuse the consumers who often wrongly perceive cooked colour to be a reliable indicator for doneness and safety. But there are some hope. Another scientific study agreed that colour alone was a misleading guide for the core temperature of a hamburger. However, when including texture of the meat and clarity of the meat juice in the judgement the situation improved.

And the practical recommendation? It might pay off to invest in a meat thermometer but once familiar with the cooking time needed to reach the recommended core temperature a bit more flexibility might be possible. As long as you promise to not eat rare or medium-rare hamburgers. 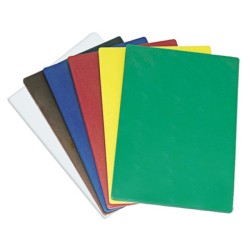 And there’s more. You are not allowed to keep the same cutting board and utensils you just used to cut your raw chicken for subsequently preparing your vegetables to eat without further heating. Come on, the food will be cold before you have done all the washing up.

Well, I am sorry to say that scientists are unequivocal on this point. You just have to use different utensils for raw and cooked meat and utensils that have been in contact with raw meat can never be used for produce that will be consumed without further heating.

For all the food safety rules for known knowns, there is little said for the known unknowns that we might worry more about.

What about the bisphenol A in our food packaging material and cash register receipts? There have been several reports of damaging endocrine effects on unborn babies, but this science is still controversial so you’re on your own on this one.

And of course nothing can be said about unknown unknowns.

Acrylamide, a carcinogen, has been present in some heated foods since time memorial following the invention of fire. But it was not until the late 20th century that it was detected by a coincidence. Since then there have been many attempts to reduce its presence in food.

What else is lurking around? That is impossible to say so better relax. Overall, a balanced diet is the best protection for a healthy life. Stay sufficiently safe to stay healthy might be the best motto!

One thought on “Known impossibles”