Dr Stefan Fabiansson is a recently retired food safety scientist. He has a past as Professor in Food Safety at the Swedish University of Agricultural Sciences, Chief Scientist at the NSW Food Authority and most recently Head of the Unit for Dietary and Chemical Monitoring at the European Food Safety Authority.
Posted on September 15, 2012September 15, 2012 Nasty chemicals

Bisphenol A can be found in many canned food products (Credit: andrivete – Flickr)

Let’s face it, we are all exposed to bisphenol A (BPA), if not daily, at least several times a week. It as an unwelcome contamination of our food, with most of it coming from migration of BPA from the epoxy lining covering the inside of food cans, except for babies. Babies get their BPA either indirectly through breast milk or directly from liquid formula served out of baby bottles made of polycarbonate plastic. We are also “foolish” enough to effectively absorb it from the gut to allow the BPA to circulate in our bodies. But here is the good bit. Within minutes we start to attack the circulating BPA to neutralise its potentially dangerous effects and then we fairly quickly excrete the modified BPA through the urine. However, a small amount of free BPA might linger for a bit longer. The big question is what damage will that small amount cause, if any? And here there is big disagreement between scientists. So let’s look at how they see it by following their traditional way of assessing food safety risks. Bear with me, it is only four steps.

What is all the fuss about (hazard analysis)?

As mentioned upfront, it is very difficult to totally avoid consuming some BPA. It can actually be found in the urine of well over 90% of people examined worldwide. This is no surprise since BPA is a high volume industrial chemical used since the 1960s as a major ingredient in making clear polycarbonate plastic. This plastic is used to make a variety of common products including baby and water bottles, sports equipment, medical and dental devices, dental fillings and sealants, CDs and DVDs, household electronics, and eyeglass lenses. More importantly, BPA is also found in epoxy resins, which act as a protective lining on the inside of metal-based food and beverage cans and in the lid of glass bottles. There are many other applications of BPA outside of the food area. It is used as a colour developer in carbonless copy paper and thermal point-of-sale receipt paper. Close to 4 million tonnes of BPA are used by manufacturers yearly. In other words it is all around us and most of us carry some daily traces of BPA in our blood.

But does it matter? Well, yes it might. It is well-known that BPA acts as an endocrine disruptor, that is it is influencing hormone responses in our bodies. As a matter of fact, because of its oestrogen-like effects, it was briefly used as a growth promoter in cattle and poultry in the 1930s and even as a hormone-replacement therapy for women. However, the oestrogen effect was quite weak so it was quickly replaced by more powerful substances. The biggest worry is for the developing foetus. There are concerns that exposure in the womb to even small amounts of the chemical at this very sensitive stage of life could disturb normal development.

SO How much do we eat (exposure assessment)?

So now we have to find out if the levels of BPA we consume are high enough to cause damage. We do that by looking at contamination levels in different foods and checking how much of the respective food we eat. Sounds simple enough, but it isn’t and here is why. Since food is generally contaminated by BPA through migration from food packaging and food consumption information rarely indicates the exact source of the food, it makes accurate calculations of BPA exposure difficult.

As a next step we have to make qualified guesses about the amount of the respective food consumed to be able to estimate BPA exposure. The following theoretical calculations assume consumption of BPA-containing food on that day. 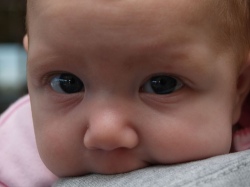 For adults, consumption of canned food might give an average daily exposure not exceeding 1.4 μg/kg bodyweight, with a possible high exposure of 4.2 μg/kg bodyweight when you really splash out. Handling of point-of-sale receipts and BPA circulating in the air might contribute to exposure, but the common view is that food is by far the major contributor of overall exposure to BPA for most population groups.

But what about the unborn baby? Here we have to rely on reported normal blood levels of free BPA in pregnant women of 0.3-4.0 ng/ml as typical serum levels. Since BPA passes freely over the placenta, the same levels could be expected in the unborn baby.

Public health concerns have been raised by findings that BPA exposure can influence brain development and modify normal behaviour. Exposure to BPA in the immediate period before and after birth has been shown to modify sex differentiation in the brain of rodents. In mice it was associated with increased anxiety, aggression, cognitive impairments, and decreased novelty seeking. In the offspring of BPA-exposed monkeys, males displayed less social activity.

Animal experiments point to the damage that can be caused by BPA (Credit: Brian_Kellett – Flickr)

But that’s in animals, right? And we all know that it is the dose that makes the poison. In most cases the animals were given quite high doses of BPA. So do we even come near the levels of BPA needed to cause damage? Many scientists don’t believe that is the case, but recent finding of suspected low-dose effects might change this around. And associations in human epidemiological studies between BPA exposure before birth and later behavioural changes would need a closer review.

In recent reports covering humans, BPA exposure has been associated with hyperactivity and aggression in 2-year-old female children when exposed before birth and with anxious, depressive, and hyperactive behaviours related to impaired behavioural regulation at 3 years of age. In contrast, childhood BPA exposure was not associated with changes in behaviour or executive function at 3 years of age.

Together, these reports and many others demonstrate that BPA exposure before birth affects several types of behaviour in a number of species and at blood levels that might be relevant for humans. What makes it even worse is that it can have immediate and long-lasting, transgenerational effects in brain development and social behaviour. That is the changes can move along to following generations by modifying gene response in something called epigenetic changes.

So what about the controversy surrounding the high BPA doses given to experimental animals compared to relatively low amounts consumed by humans? In most experiments animals have been given amounts of BPA higher than 50 μg/kg bodyweight and often at mg level while human daily consumption would be 5 μg/kg bodyweight at the most. Curiously enough the resulting blood levels in animals and humans have been very similar. Animals given 50 μg/kg bodyweight showed serum levels of free BPA of 2.0-4.6 ng/ml, well within the range of normally exposed humans. There is now speculation that other sources could contribute to human exposure or that metabolism after repeated exposure as is typical in humans could be different.

To be clear there is still remaining uncertainty about the exact doses of BPA needed for the described effects to occur. Additional large prospective cohort studies are needed to confirm and validate findings from animal studies. However, even in the absence of epidemiological studies, concern over adverse effects of BPA is warranted given the unique vulnerability of the developing foetus and child.

What does it all mean for us (risk characterisation)?

Based on previous scientific reports a Tolerable Daily Intake (TDI) of 50 μg/kg body weight per day has been set for the substance – that is the amount that can be ingested daily over a lifetime without appreciable risk. This is well above the calculated intake levels of BPA for most people.

However, although initially considered to be a weak environmental oestrogen, more recent studies have demonstrated that BPA may be similar in potency to the natural oestradiol hormone in stimulating some cellular responses. Emerging evidence also suggests that BPA may influence multiple endocrine-related pathways. Some scientists suggest that studies in rodents have identified adverse effects of BPA at exposure levels at or below the current acceptable daily intake level for this compound. However, when scrutinising the administered doses given to animals they seem to be much higher then the estimated intake in the exposure chapter above. Still they show that the circulating blood levels of free BPA in the age group with highest dietary exposures in humans (i.e. infants 0–6 months of age) is the same as measured in the animals. This is puzzling. 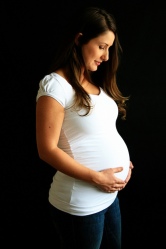 The child during pregnancy is the most sensitive to BPA (Credit: molly_darling – Flickr)

Much more investigation is needed to understand the potential adverse health effects of BPA exposure in humans and to understand the multiple pathways through which it may act. Although many questions remain to be answered, it is becoming increasingly apparent that exposure to BPA is ubiquitous and that the effects of this endocrine disruptor are complex and wide-ranging.

At this stage it seems prudent to focus on the effects on the most vulnerable population group, the developing foetus and child. The most recent research seems to point to real life effects at this vulnerable life stage at current exposure levels. The only way to reduce this risk would be to limit BPA exposure in pregnant and lactating females. However, since this would be impractical, a general phasing out of the use of BPA in products in contact with food seems to be the only safe solution. New research underway and the current review of the scientific literature by food safety authorities will hopefully be able to resolve the issue once and for all.

One thought on “The safety of bisphenol A”